Fledgling Thieves is the introduction mission at the start of the co-op campaign.

You play as Wulfar and the Twins out on their first battle together clearing Felheim undead from their camps.

This mission functions as a tutorial for Riflemen, Rogues, and Hideouts, and introduces Wulfar's and Errol & Orla's Grooves. These are exclusive additions to Double Trouble.

Victory: Defeat all enemies and neutralise the enemy Barracks

Defeat: Wulfar or the Twins are defeated, OR the Rogue is defeated before it can deliver gold. 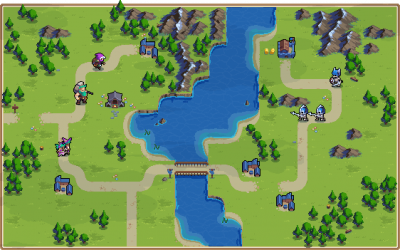 When given control to move the Rogue, if at any point it is defeated before depositing gold for the first time, the tutorial cannot progress, causing an automatic Defeat. However, it's not actually mandatory to complete the tutorial for the mission to be completed.

Upon purchasing a rifleman, two spearman will arrive at the South edge of the map on Errol & Orla's turn.

The hideout can only recruit Riflemen, therefore you only begin with the initial Rogue.

The Outlaw clan are enjoying their day when they're suddenly overrun by skeletons. Wulfar, the leader of the clan, is called over to handle the situation, and takes this opporunity to give his two children, Errol and Orla, their first chance in battle.

After pilferring the gold and clearing out the skeletons, Wulfar and the twins returns home. But Enid has mysteriously disappeared! Vesper, a fumomancer familiar with Wulfar, reveals herself to have kidnapped Enid in exchange for a hefty ransom. Vesper knows Wulfar lacks the funds, but sets out a plan: a heist on each of the four nations of aurania, Cherrystone, Floran, Heavensong, and Felheim, to take all of the gold in Aurania. Reluctantly, Wulfar complies, and prepares to set out to begin the heists. For now, they need to follow Vesper's demand, if they hope to get Enid back.

Outlaw 2: They went that way!

We've got a wee situation on our hands. Things could get ugly.

Ye want us there, Da?

If yer up for it?

Of course we're up for it!

Alright. Let's teach this little lot not to mess with us Outlaws!

We're gonnae defeat the Felheim troops and kick them out of that Barracks on the other side of the lake.

If you capture the Hideout next to you, we can recruit Thieves and Rifleman, right Da?

It seems that this particular Hideout can only recruit Riflemen.

You'll need to use that Thief to ransack the nearby Village for gold.

This'll be fun! Never met a thief I didn't like! Come on, Errol, let's ransack that Village!

[Introduction Dialogue] If selecting something except capturing the Hideout

I need to capture the Hideout so that we can recruit new units.

We did it, Errol! We got the gold!

Aye, but bear in mind that heavy bag will reduce your Thief's movement range.

And did ye notice that ransacking a structure made it neutral?

A Thief will neutralise a structure but they're not able to capture it.

Now, ye need to bring the hold back to the Hideout - carefully. Thieves are vulnerable.

Aye, but if yer Thief is defeated on their way back to the Hideout, ye'll lose all that gold.

Don't worry, Da. We'll deliver the gold safely on our next turn.

This Hideout belongs to me, so I receive any gold that gets deposited there.

If there are multiple Hideouts on the map, check which Commander needs gold the most.

I should have enough gold to recruit a Rifleman on ma next turn.

Riflemen are awesome! They can just shoot anyone on the map! Bam!

That's not quite right... Rifleman have long range, but they can't target enemies

positioned diagonally to them.

And while they're great against footsoldiers, they can't target units on forest tiles.

Errol's right. Also, Rifleman can only load 3 ammo at a time.

When you're low on ammo, you'll need to start thinking about reloading your rifle.

And then... Kablam! Right between the eyes!

Start of Errol & Orla's turn when Wulfar has recruited a Marksman

One spearman for us, and one for you, Da!

We'd better keep our Spearman together so we can make use of their crit.

Now, I dinnae want to hear any bickerin' over whose Groove to use, or whose is best...

My Groove creates an area of healing - it's a great strategic move.

My Groove creates an area of destruction! And it's amazin'!

Your Groove does in friendly units too! I'm scared of accidentally stepping on it...

And yours heals enemy units too! It's so--

I said no bickering.

Start of Wulfar's turn when at 100% Groove

That's right! My Groove lets me propel an adjacent unit across the map. Friend or foe.

The unit will take damage, and it will also damage any units close to where it lands.

Most importantly, if it lands on terrain it can't normally traverse, it'll be defeated.

The enemy doesnae have any more Villages, Da.

And no Villages means no more gold.

Defeat all enemies before neutralising Barracks

No more enemies in sight!

We still have to take down their Barracks, or they'll recruit more units.

Then let's get a move on!

Neutralise Barracks before defeating all enemies

Without that Barracks, the enemy cannae recruit any more units.

Now, let's clear out the rest of these skellies!

All enemies defeated AND Barracks neutralised

We did it! We beat the skellies!

Ye did well, both of ye.

Rogue is defeated before depositing gold for the first time

We really needed that Thief to secure us funds...

We rattled their bones and no mistake!

That gold had our names on it, that's for sure!

Did ye see the look on that one skelly's face when I hit him right between the eyes!?

It was the funniest thing I've ever seen!

Hello, Wulfar. It's been a while, hasn't it?

Oh, fabulous! You're getting it!

Now... ask me what I want for her safe return.

... Many reasons. Chief among them - I want riches!

Riches beyond my wildest dreams! I want to be simply swimming in gold!

As talkative as ever, I see.

Ye talk enough for the lot of us.

That's quite enough from the peanut gallery.

Leave the bairn alone and get on with yer spiel.

Why so cross, Wulfar? Worried?

Well, you can turn that frown upside-down!

I know you don't have a fortune, what with just the one income and so many mouths to feed...

But I also know how you can get me my money.

Can you guess what the plan is?

The Imperial Palace of Heavensong, the Stone Mountain Fort of Felheim...

...the Celandine Vault of Cherrystone and the Floran's Iron Root reserves.

All the gold in Aurania!

A small price for someone you love so very, very, much, don't you agree?

I think that's everything. Didn't this go well?

I'll be checking in periodically, as you can imagine. But for now...

Dinnae worry. We're gonnae get her back.