A Prickly Business is the 2nd mission of the Floran route in the co-op campaign.

You play as Wulfar and the Twins battling to reach the Iron Root reserves of the Floran, under the guard of Greenfinger and Nuru.

Victory: Reach the Treasure, and have both Wulfar and the Twins escape. 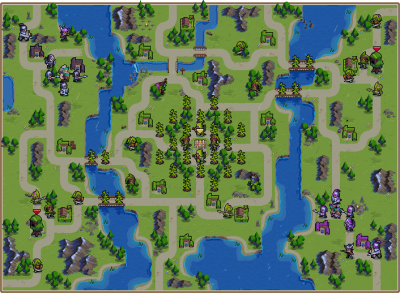 The path across the river is initially blocked by vines. These vines take no damage and remain full health indefinitely. Vines on the bridge are removed by destroying the Stronghold nearest to them, while both Strongholds must be destroyed to access the treasure.

All units and structures on the central island begin inactive, they will not move, attack, or use Groove. However, they can be activated through several means. Upon destroying a Stronghold, Greenfinger and Nuru will begin to move on the players, and Nuru may use her Groove. Upon destroying both Strongholds, Greenfinger will also enable his Groove. Damaging either Commander will also allow them to advance on the players early. Damaging any of the 4 units surrounding the treasure will enable them to advance upon the player. Lastly, taking a Barracks or a destroying a Stronghold will activate all units and structures on the central island--but Nuru and Greenfinger will not use Groove until their respective amount of Strongholds are destroyed.

After taking the treasure, a highlighted zone appears, where both Wulfar and the Twins must reach to complete the mission. This will begin enemy reinforcements, with a Giant, Mage, and Archer each former Stronghold's corner to the North-East and South-West. Additionally if one (and only one) Commander is defeated, an extra Giant and Mage will spawn at the North of the centre island. Afterwards, if the enemy has less than 8 units on the map, for the first time they will spawn 2 Warships, then they will spawn additional Giants, Cavalry, and Mages, across the map on all subsequent times, creating an infinitely replenishing army.

Greenfinger and Nuru do not need to be defeated to complete the mission, and defeating both of them does not grant an automatic victory.

The weather is Severe for the first two turns, after that it becomes Always Sunny. Upon taking the treasure, the next turn and all subsequent turns will have Severe weather. However, Severe weather does not affect Riflemen.

As Wulfar and the Twins move towards the Iron Root, they are spotted by Nuru's scouts. With this intel, Greenfinger and Nuru position themselves at the Iron Root to defend against the Outlaws. The Iron Root is protected by extremely powerful vines, so the Outlaw family prepares a pincer strike, to take out the key Strongholds defending the treasure.

After successfully escaping the Gloomwoods with the Floran treasure, Errol and Orla reflect on their skills and differences from Wulfar, but are interrupted yet again by Vesper arriving to receive her gold. Now three of the heists are complete, they need only one more to pay Enid's ransom.

Nuru! I thought you had gone westward to hunt in the Lost Leagues?

And I thought you were at the Great Tree!

Anyway, never mind that - it's lucky I ran into you.

Scouts just told me there's a band of Outlaws working their way north through the Gloomwoods.

From the path they're taking, it sounds to me like they're heading for Iron Root.

And guess what? The scouts say one of the Outlaw chiefs has come in person!

And this is cause for excitement?

Yeah! I reckon we're in for a pretty good fight!

Can't let those Outlaws get their mitts on our gold!

Let's put the pedal to the metal!

Judging by the context, I believe she means us to make haste.

The Vines surroundin' the hold are impenetrable.

But they're fed by the roots of the Western and Eastern Strongholds...

Then we can grab the gold and run. Escape boats will arrive for us when the time comes.

They've certainly thought this through.

But they're vastly outnumbered... and they have to get past the two of us too!

Yes. Perhaps they are not as wily as they think...

We chopped down their Stronghold! We're a couple o' wee lumberjacks!

But we're very mature for our age.

Hmph. They've taken down one of the Strongholds. Just one left.

Just one Stronghold, yes. But also you and I. They still have to get through us.

That was some brilliant tough guy talk.

Thank you. I've been practising.

Destroy both Strongholds (No commanders defeated)

The vines are gone!

Stop! That gold belongs to the Floran!

Keep your mitts off your gold!

You should know that the Floran do not suffer thieves gladly.

And you should know that we're not leavin' without that gold.

It seems my warning has fallen on deaf ears. I had to try.

Succinctly put. Which is good, because this is no time for dallyin'.

We have to get ourselves to the boats.

End of enemy turn after treasure is taken

They're bringin' in reinforcements. Get to the boats.

End of enemy turn, when below 8 units (after treasure is taken)

Warships?! More reinforcements?! How many Floran are there in these woods?!

Nuru! Are you alright?

I will be... but they're tougher than they look...

We're not gonna let you get away with this. You just wait!

My people will not forget the wrongs you have done them.

Hurry up, kids. I need youse on that boat!

We made it onto the boat, Da! We're ready to go when you are!

Wulfar and the Twins escape

Errol and Orla are defeated

Those Florans are no joke.

Outlaw: Chief, We've got a problem.

Outlaw: A wheel's come off the loot wagon. We need someone to lift the cart so we can fix it back on...

One day, I'm gonnae be big enough to lift a wagon!

I do too - everybody does.

Aye, but you could shoot a flea off a dog's back at seventy paces...

And YOU can shoot MAGICAL MISSILES out of a COIN!

Shut yer gob or I'll shoot ye in the face.

I've not touched a single cyan hair on their teeny tiny heads.

I'm just here for the gold.

Ye reckon ye could hit her wi' a fireball?

...Probably for the best. We still dinnae know where she's keepin' Enid.

Errol and Orla's Stronghold is destroyed

Oh no! Our Stronghold!