The Breach is the 1st mission in Act 1 of the single player campaign.

You play as Mercia commanding soldiers to defend against invading Felheim troops.

This mission functions as a tutorial to the basics of combat, and the use of Critical Hits.

Defeat: All of Mercia's units are defeated. 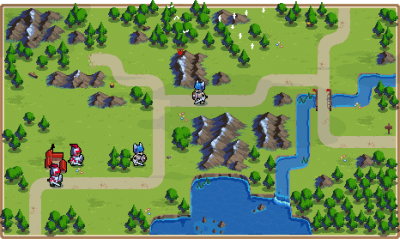 While a village is present, the enemy will never attack it. This however can be used for reinforcement, if the player is already familiar with this feature.

Some months after the death of Mercival, Mercia ascends the throne as queen of Cherrystone. Felheim have begun their invasion against Cherrystone, as scouts breach the country's border.

It becomes clear the Felheim army will only continue to advance upon Cherrystone.

Congratulations on your coronation, Queen Mercia.

Emeric... Do you really think I'm ready to be a queen?

I have no doubt. You are your father's daughter.

Royal Guard: Your Majesty! Felheim scouts have breached the border!

They're here, in Cherrystone?

I can do this.

I know you can.

These skeletal warriors are Felheim troops!

We must defeat them all to secure this region.

We should begin by attacking the closest Dreadswords with out unit of Swordsmen.

Right... Let's get this over and done with.

Notice the numbers that have appeared next to the two battling units?

Yeah! There's a little number next to each of them.

These represent the units' health. They appear when it drops below 95%.

The number 5 indicates that the Dreadsword is down at around 50% health.

And my Swordsman is down to about 80% health. Got it!

Then let's attack the Dreadsword with our second Swordsman.

My Queen, may I interject for just a moment?

When selecting a target, a Damage Preview will appear above its head.

The Damage Preview indicates what damage will be dealt by both units during combat.

You see, the health of a unit suggests more than how close it is to defeat.

The more damage a unit takes, the weaker its attack power becomes.

So a healthy unit is a stronger unit?

Indeed! But it looks like your Swordsman will do just fine here.

Let's move the unit of Swordsmen to the forest and attack the Dreadsword.

Move the Swordsman to the tile below the enemy, and choose 'Attack'.

[Mercia's Turn 1] (3) If selecting something except attacking, after moving to location below Dreadsword.

It seems like they're not giving up quite yet.

Just in the nick of time!

Look! It seems like we've been provided with a new unit type - Pikemen!

This might be a good time for you to learn about Critical hits.

All units have conditions under which their attacks are stronger.

We call these attacks Critical Hits.

I've never heard of those.

Do not worry, my Queen. This information is easy to find.

Let me show you how to find information about a unit's 'Crit'.

This is the Tile Info screen.

Here, we can find useful information about out selected unit.

This part gives us a good overview of the unit.

Hmm... the Pikeman Crits when adjacent to another Pikeman!

You can bring up this Info Screen on any unit, terrain or structure.

Use it often, and you'll learn fast!

Alright! I'll make sure to check it often.

When you're ready, you can close this window.

We should make sure that the Pikemen stick together.

We've lined up our first Pikeman.

Let's attack the Dreadsword with our second Pikeman!

Let me draw your attention to the Damage Preview once more.

Oh, the arrow is flashing!

Well spotted. A flashing arrow in the Damage Preview is a good sign.

It indicates that you're about to land a Critical Hit!

Thanks to the placement of the first Pikeman...

Keeping your Pikemen together will ensure a stronger offence.

When encountering a new unit type, it's important to learn about their Crit.

I'll leave you to defeat the rest of these Felheim troops.

Thank you, Emeric. I couldn't do this without you.

We should find out more about Pikemen!

Let's move the Pikeman on the right into a good position

That's the last of them.

All ally units are defeated

Oh no! Maybe you should have paid more attention to the Pikeman's Critical Hit condition!

A good start, but Felheim won't stop there. We must remain vigilant.

Yes. And in greater numbers.

A whole horde of skeletons...

Indeed, and much else besides. I'd forgotten you had so little experience with the undead...

Cherrystone is normally so peaceful. I've never seen them here before...

But now they're coming, and they won't stop.

All undead but one. We've spoken in your lessons of their leader - Valder...

'And a Necromancer of great power.' I haven't forgotten...

Well, we should make a move. The undead are likely to be advancing upon other parts of the kingdom.

Emeric... Do you think Valder will come to Cherrystone himself?

Yes, Your Majesty. I do.