Breaking In is the 1st mission of the heavensong route in the co-op campaign.

You play as Wulfar and the Twins entering into Heavensong by breaking through the border defences guarded by Ryota, to reach the Imperial Palace. 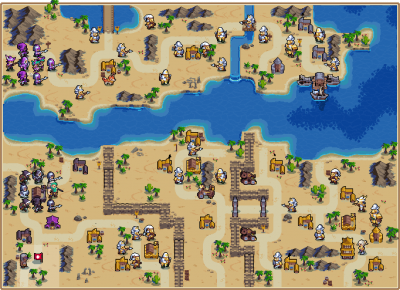 Most units will not advance on the player until the Ally army approaches their respective area, or is damaged from afar. The final group within Ryota's base will advance if both gates are destroyed, any inner cracked wall is destroyed, or any unit enters the area, but will not react to ranged attacks.

Upon the Twins approaching the North-East set of neutral buildings, the Enemy army will begin to advance and attack that area.

Upon capturing the Port, the neutral Barges and Warship will convert to Errol and Orla's team.

Errol and Orla's Hideout on the South-West will always be inactive. It can only be used for depositing stolen gold, and not for purchasing new units.

Upon speaking with the Contact to receive Sparrow Bombs, Wulfar receives a new pair of Sparrow Bombs every time the old set is lost. This supply is infinite until at least one cracked wall is destroyed, at which point the player will receive only 4 more sets (8 Sparrow Bombs) before running out. If the player runs out of Sparrow Bombs, there is no means to destroy any remaining Cracked Walls, and must instead rely upon Barges or breaking the Gates.

Making their way into Heavensong, the Outlaw family avoid detection from the Heavensong border guard and make preperations to break into the enemy territory. Knowing the border security, Wulfar enlists the help of a bomb-making friend to blast their way through the defences, while Errol and Orla find a side path to take on their flanks.

Having successfully broken through the defence, the Outlaws flee into a sandstorm to evade Ryota's pursuit. Sneaking through the storm they make their way towards the Imperial Palace of Heavensong, to secure the final heist to save Enid.

No guides are written yet. Feel free to contribute by adding your own!

Lionblade 1: That out there! Between the dunes!

Lionblade 2: I think so, yeah.

Lionblade 1: There wasn't a cactus there before...

Lionblade 2: It must be a new cactus. It must have just grown.

Lionblade 1: What, over the course of a few minutes?!

Lionblade 2: I mean, just grown big enough to see. Like, before, it was a tiny bit too small to see, and now it's just about right...

Lionblade 1: That's stupid. I'm going to go and check it out.

Lionblade 2: But we're supposed to stick together! If you go, I have to go!

Lionblade 2: Hinata, are you seriously going to make me wall all that way?!

(Enter Wulfar and the Twins)

Let's get going, we're almost there.

Alright, here's the plan: we need to get past this border wall.

And to do that, we're gonnae get a little help from a friend of mine...

Once we're through the wall, we destroy their Stronghold or defeat their Commander.

That'll stop them from following us.

And we'll be helping you from up here, right Da?

If we can capture that Tower and Port, we can send ye some reinforcements.

But not before I've spoken to ma pal over there. I should do that now...

This is goin' well, Da! We'll be done wi' these bahookies in no time!

You are as crude as your tactics. Like a blunt instrument wielded in clumsy hands.

Ignore him, Errol. He's just sore cos he's losin' to a couple of ten years olds.

I read about those Oni... Ma book said they're a force to be reckoned with...

Our Oni are super tough!

Defeated all enemies on North land

That's all of them defeated! We did it!

Da, we got the Tower! We can send ye winged reinforcements!

A Port! The best thing about Ports is Warships...

...and the best thing about Warships is cannons!

(Barge and Warship convert to Errol and Orla's team)

Never better! I've got those bombs you wanted! Beautiful, they are!

They'll take you straight through those walls like a hot knife through butter!

I could only make a few, mind - resources bein' what they are - so don't waste 'em.

Right! Let's see what these can do!

Wulfar's Turn after detonating 2 Sparrow Bombs without breaking a wall

These bombs pack a punch. I should try using them on a weakened section of the wall...

Wulfar's Turn after detonating 4 Sparrow Bombs without breaking a wall

There's cracks in this old wall - in my considered and professional opinion, you should use the bombs there.

Wulfar's Turn after detonating 6 Sparrow Bombs without breaking a wall

Hmm... If I detonated a bomb on one of these spots, it'll blow a hole right through...

Hahaha! That'll do it!

That did some damage!

Detonate Sparrow Bomb next to no targets

Oi! These bombs are difficult to make, you know! Don't waste 'em!

Sparrow Bomb is defeated and hurts enemy in explosion

Sparrow Bomb is defeated and neutralises structure in explosion

Aye, but look what it did to that buildin'...

Sparrow Bomb is defeated with no targrts in explosion

Oi! These bombs are difficult to make, you know! Don't waste 'em!

Told you my bombs would get you through the wall!

You know what they say - nothin' lasts forever!

Those are the last bombs! I'm completely out! Now, if you'll forgive me, I'll make myself scarce.

As the sayin' goes, "Always leave 'em wantin' more" - especially when they want your head!

Raiders, why have you come to Heavensong?

None of yer beeswax!

Miscreants. Cease your destruction and return our Villages!

Aah!! Our Barracks! How dare you!!

Defeat both enemy Barracks outside Ryota's base

Commander! Both of our outer Barracks are gone! What are we going to do?!

You may raid, ransack and run amok, but Heavensong stands eternal.

This nation is the jewel of an empire that crowns the globe.

Skilled as you may be, you are no match for Heavensong.

Aaaah! Outlaws!! They've made it into Heavensong!!

Calm yourself, Sergeant. Those who panic cede control to their foes.

Outlaws, hear my words: Heavensong stands against you. We shall not be overcome!

Och aye! He's gonnae feel that in the morning!

Did ye see that Stronghold crumble? Like knocking over a wee sand castle!

Aye, ye're not wrong there!

Errol and Orla are defeated

Where did this weather come from?! I feel like I'm being grated!

I've got sand in ma eyes.

I think the sandstorm's good though, isn't it, Da?

They cannae find us in this.

Never mind them - I cannae find ma own feet!

Hinata: You were right, it is a cactus.

Oh no... The Stronghold. We needed that!