The Getaway is the 2nd and final mission of the Felheim route in the co-op campaign.

You play as Wulfar and the Twins fleeing Felheim with their stolen treasure, under pursuit from an angry Ragna.

Victory: Have the Twins and Wulfar escape. 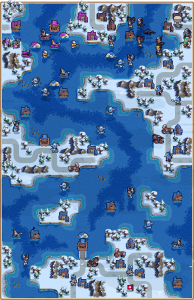 The allied teams can be split according to unit type, with Wulfar controlling all Aerial units and a Tower, and the Twins having all Naval units and a Port. There are also an additional enemy Tower and Port for them to capture respectively.

The only available land units in the mission are the 2 Mages and Commanders. There are no Barracks to replenish the Land army for either side.

After at least 1 ally unit enters the South half of the map, the Port and Tower at the South-most island will begin recruiting new units.

After at least 10 units enter the South half of the map, OR at least a single unit reaches the South-most island, Ragna will arrive with a large army at the North edge of the map, including 2 Warships, 2 Harpoon Ships, 2 Turtles, and 2 Aeronauts. Afterwards, if Ragna has less than 15 units on the map, she will spawn additional, random, reinforcements at the North edge, creating an infinitely replenishing army.

After escaping the fortress with its vast quantities of gold, Wulfar and the Twins continue their escape. With Ragna quickly behind them, they must make their way through the army to get to safety.

When they escape, Vesper appears. The twins learn that Wulfar and Vesper had once been friends. Despite Wulfar's belief in "honour amongst thieves", Vesper has cast that aside, and insists on receiving her gold. With the first heist complete, the first step to Enid's rescue is complete, but a long series of heists still awaits them...

These dead guys dinnae give up, do they?

Whatever happened to "rest in peace"?

This is about the least peaceful place I've ever been!

And why are they being so stubborn?

All we did was steal absolutely all of their gold...

Have we lost them?

We need to get ourselves down south and out of Felheim...

But this river is rife wi' undead defenses. We'll have to move slowly and mind our way.

Should we try and grab that Port on the way down? And the Tower too? Snatch both out from under 'em?

We need to stay vigilant and look after each other if we're goin' to get away wi' this.

Neutralise all Water Villages in the North-East

We're hittin' 'em hard! If I was those skellies, I'd be runnin' scared!

Aye, I suppose. But we're not scared!

Neutralise all Villages in the North-West

We're makin' good progress! We'll be out of here in no time!

Neutralise Port in the North-East

Phew... That takes some of the pressure off...

Neutralise Tower in the North-West

That's their Tower done for!

They still have siege weapons sittin' on the southern island, ye know...

Destroyed all siege weaponry on South island (Ragna has not arrived)

That's the last of the siege weapons.

Destroyed all siege weaponry on South island (Ragna has arrived)

That's the last of the siege weapons.

AND STOP RUNNING AWAY!!

AND STOP MAKING ME LOOK BAD!!!

Neutralised all recruitment buildings on South island (Ragna has not arrived)

Och... How embarrassing for the Felheim army - no Tower, no Port, no nothing...

Neutralised all recruitment buildings on South island (Ragna has arrived)

Och... How embarrassing for the Felheim army - no Tower, no Port, no nothing...

Da, we've made it ashore!

Da, come on! Stop being such a slowcoach!

Both Wulfar and the Twins reach escape zone

Did ye see those skellies crumble?

Rest in pieces, am I right?

And what did ye make of that loudmouthed patchwork lassie?

The girl needs to work on her temper...

How was the heist? Lots of undead?

To think I used to call ye a friend...

Oh yes. We were ever so close.

There's no need to disturb old graves, Wulfar. We're neither of us necromancers.

And besides, graves are for robbing, if you ask me.

What about honour amongst thieves?

What childish nonsense! Do you believe in fairies and unicorns too?

What about you two - Error and Orful... or whatever you're called?

Do you children also believe in fairy tales?

What a wicked tongue!

Wouldn't it be a terrible shame if someone were to remove it from your head?

You always were so sensitive...

In any case, I must be getting on.

As you know, the devil makes work for idle hands.

If you'll just show me to the gold, I can be getting on my way...

I cannae believe Da was friends wi' that boot.