An Infamous Foe is the 1st mission of the Cherrystone route in the co-op campaign.

You play as Wulfar and the Twins fighting through Cherrystone's army to make their way to the gold reserves.

Victory: Rescue all prisoners AND defeat Caesar or destroy his Stronghold. 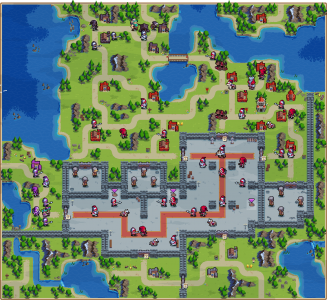 To complete the map, each set of prisoners must be released by placing an ally unit on the highlighted levers. By doing so, each one provides a set of additional units which will automatically join Errol & Orla's team.

Most of the enemies within the fortress will only move when their group is approached.

Upon either approaching Caesar's base, or destroying either of the Gates facing towards his base, all of the front gates will be removed and Caesar will begin advancing on both teams.

After making their way into Cherrystone, their next objective is the Celandine Vault of Cherrystone. On their way, they encounter Commander Caesar, infamous among outlaws for his tyrannical brand of justice. Making their way through his army will be difficult, so the Twins are tasked with recruiting prisoners Caesar has captured, to assist in the effort.

With Caesar's army defeated, he runs away to safety, much to the relief of Errol and Orla. Though Wulfar is upset to have missed his chance to express his contempt for Caesar's actions, he's not upset at his children for disagreeing. With their differences aside, they head further into Cherrystone to begin their heist.

(Enter and exit Battlepup and Caesar)

(Enter Wulfar and the Twins)

Did you see his wee paws?!

Ye said he was a menace.

But even Errol can see he's a dear wee beastie!

That dog isnae sweet in the slightest.

He's the epitome of aristocratic tyranny! He's a gilded, dallyin' prince armed with the biting maw of an elite and distant peerage, beholden to no one, feastin' on the bones of those crushed beneath the yoke of serfdom!

That pesky dog is well protected. Reachin' him won't be easy.

But I have a plan!

D'ye see the people they've locked up in the cells?

A rescue mission! Just leave it to us, Da!

Watch your back, dog... We're coming for ye!

Thank you! We've been in 'ere for days!

Thanks! We owe you one! Want a hand with these millitant tyrants?

Aye, we hoped you'd say that!

Woah! Rescued by a couple of kids?!

The phrase yer lookin' for is "Thank you".

The first group of prisoners are free! We're the best rescuers in the history of rescuing!

Aye! But we've still got a couple of cells to go.

Yer right, Errol. No rest for the wicked!

Only one group of Outlaws left to set free!

Those were the last prisoners!

Och, I was enjoyin' settin' them all free!

Released all prisoners while enemies remain

We should head out to help Da wi' the battle!

Our Barracks! We have to stop them!

That's another barracks down!

Start of Caesar's turn after allied units approach Caesar's base

And now the rest of his troops know we're here!

Yer Stronghold is done, dog. It's time for us to have a wee chat.

With the troops out of our way, we can focus on releasin' the prisoners.

We freed everyone and we won!

(Enter the Twins and Wulfar)

Oh good, he got away!

Ye've yer own minds and yer own hearts. Ye'll not be lettin me tell ye how to think and feel.

I was just really lookin' forward to givin' that dog a piece of ma mind...

And then he bolts before I get the chance. Cowardly cur.

But maybe ye dinnae have to tell him off to his face?