From Wargroove Wiki
(Redirected from Cherrystone)
Jump to: navigation, search 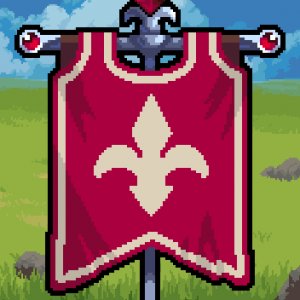 The Cherrystone Kingdom is one of four nations that inhabit the continent of Aurania. Homeland to Mercia, it sits on the East in a lush environment, ruled by a benevolent monarchy. It is the starting location in the Main Campaign.

Following the assassination of King Mercival II, his daughter Mercia was crowned Queen and embarked on a journey to gain allies against the invading Felheim Legion.

the Cherrystone Kingdom was previously ruled by the late king Mercival II, a peaceful and loving father to Mercia, once a princess, she has become the leader of the Cherrystone army, and their Warrior Queen. She is joined alongside her royal advisor and close friend Emeric, a great mage and inventor, acting as a mentor for Mercia. They are supported by their ever-adorable royal dog, Caesar.

Cherrystone is a peaceful kingdom, neighbouring Felheim and Floran they are surrounded by hostile dangers, but have formed alliances with the Floran Tribes and the Heavensong Empire, and have kept the Felheim hordes at bay. Though they are in a time of peace, great tensions rest between Cherrystone and Felheim. Cherrystone is also known for having strict policing of criminal activity, putting them as the largest enemy to Outlaw clans.

Cherrystone has been ruled by a succession of monarchs, started shortly after the end of the Great Dissonance,[1] founded by a great mage named Myden from long ago. The people of Cherrystone live in relative harmony, living off the lush landscapes and guided by kind rulers. The Cherryblade is a sacred weapon of Cherrystone, passed down through the royal family to those deemed capable of wielding it, alongside stories taught to their children about the nation of Cacophony.[1] Mercival II had also intended to teach Mercia this story, but was unable to do so in time.[2]

Cherrystone is home to powerful alchemists, including the great Emeric, inventor of a magical crystal capable of producing shielding auras and powering stone golems, named cherrystones after his proud homeland. Many mages of Cherrystone go through training to learn to produce this magical specialty.[3]

Cherrystone is a Kingdom, and represents a traditional "Knights and Dragons" style of medieval fantasy, with knights in shining armour, traditional european fantasy style Dragons, and the simplest design for other units such as Wagons and Amphibians. The Commanders all have American and European names, following the western inspiration. It can also be seen that the main Commanders of Cherrystone represent a classic Role-Playing Game team: a duty-bound knight, a wise mage, and a cute animal companion.

It is also the faction with the most exposure of human designs, as the inhabitants are largely human, with their faces fully shown (in contrast to Heavensong's frequent use of animal masks), and many of the inhuman entities (e.g. Dragons) are controlled by human operators and riders.

The Commander Grooves are designed with an emphasis on simplicity and teamwork: Mercia heals injured allies to support a squad's advances, Emeric protects allies from harm allowing a squad to hold a position, and Caesar provides allies the ability to move again, allowing for multi-attack strikes with key units. They are all simple to learn, and work best when surrounded by allies, promoting the fundamentals of tactical formations. As the first Grooves given to the player in the Main Campaign, they work as the introduction to Groove mechanics. 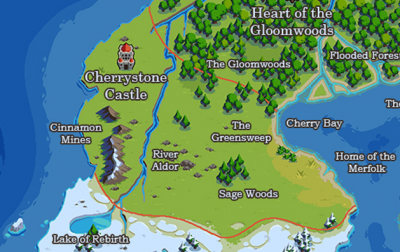 The locations of Cherrystone

A small bay across the eastern shore of Cherrystone, bordering the Greensweep. Floran Splashers have been known to ride currents from their homeland onto the shores of Cherry Bay, startling some of the local fishermen.[1]

The residence of Cherrystone's royal family, outside the capital city. Inside the castle lies the hall of remembrance, where every Cherrystone Swordsman has their named etched onto the wall.[1]

Mines across a range of mountains on Cherrystone's west coast, home to the Harpies after being attracted to its scent, and now help the miners during rockfalls.[1]

A river in western Cherrystone, starting from the Lake of Rebirth in Felheim, and stretches to the Gloomwoods. On the evening before the summer solstice, Cherrystone Rangers jump into the river, as part of a long-held tradition.[1]

A small forest in the centre of the Greensweep. Here, Cherrystone's Pikemen complete their training by harvesting wood to craft their spears, and Witches are trained in magic by communing with the spirits.[1] The woods are considered sacred, and nurtured by the Pikemen, perhaps for being home to invisible spirits only trained Witches can see.[1]