From Wargroove Wiki
(Redirected from Heavensong)
Jump to: navigation, search 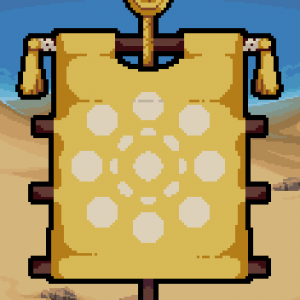 The Heavensong Empire is one of four nations that inhabit the continent of Aurania. It is ruled by Empress Tenri, and sits on the West in a desert land with bright sands.

The Heavensong Empire is ruled by the wise Empress Tenri, and mother to the heir, Prince Koji, a genius mechanic responsible for the nation's greatest creations, including Tenko, the battle puppet. Their massive army is lead by Tenri's loyal general, Ryota. 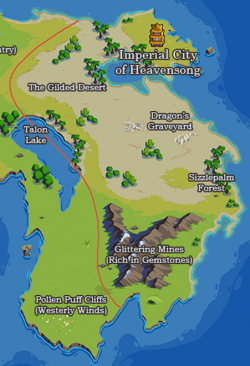 An oasis in central Heavensong where Shiba Inu are bred before being transported to the grasslands.[1]

An area of desert south of the Imperial City where the skeletons of many dead dragons rest. The sand from this area is used to make glass razors for Heavensong's Harpoon Ships, and the restored skeletons of dragons were used to model the Ryuu MK I.[1]

Northeastern Heavensong is dominated by this vast desert, on the northern half of the border with the Lost Leagues. This is where Heavensong's Lionblades are given rigorous training.[1]

A massive mountain range in southern Havensong, rich in gemstones that give it the name. Heavensong's Hawkeyes practise archery atop these.[1] Within the mountains are the Glittering Mines, presumably where gemstones are extracted.

An area south of Talon Lake, on the southern half of the border with the Lost Leagues. It is home to the Kappa, an independent clan loyal to the Empire.[1]

The capital city of the Heavensong Empire, on the northeast coast of Aurania, and the home of Empress Tenri and Prince Koji. The Oni MK I—predecessor of the Oni MK II—are regularly used for construction within the city.[1]

The desert coast east of the Dragon's Graveyard. Here, Heavensong's Heronguard train by spear-fishing for sailfish, and the Merfolk collect brightly coloured shells from its shores.[1]

A palm tree oasis south of the Scorched Beach.

A large claw-shaped lake in western Heavensong, near the home of the Kappa clan.[1]

Both Heavensong Empire Commanders and Units wear masks that represent their attributes.