From Wargroove Wiki
(Redirected from Felheim)
Jump to: navigation, search 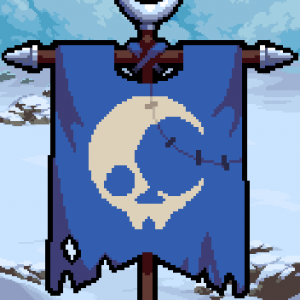 The Felheim Legion is one of four nations that inhabit the continent of Aurania. It is ruled by the necromancer Valder, who rose to power by right of mastering the legendary Fell Gauntlet, and is an allied force of many factions, including the vampires and deepfolk. Their land is frigid and desolate, inhabited far and wide by skeletons.

Recently, Valder launched an invasion of the Cherrystone Kingdom to the North, after war broke out when Cherrystone's king was assassinated.

Valder is the ruler of the Felheim Legion and wielder of the Fell Gauntlet, capable of raising the undead. He created a zombie subordinate, Ragna, from the remains of history's greatest warriors, and was able to ally with the vampies, ruled by their High Vampire, Sigrid, an ancient and powerful vampire.

Felheim is a vast legion of undead races, with their territory bordering the peaceful Cherrystone Kingdom with access to the advanced Heavensong Empire across the Great Ocean, they are surrounded by peaceful but very powerful forces, and while Felheim has been in a time of peace for several years, it has a grim history with its neighbours, starting many wars, and its undead drones invading onto bordering lands, putting them on a razors edge towards another war. Despite this, Felheim's influence expands far and wide, with the undead hordes across the distant Lost Leagues[1][2], and even some residing near the Dragon's Cradle.[3]

Felheim operates as an alliance of different races. While Valder commands the undead skeletons and wraiths, he also established trade agreements with the Deepfolk,[4] and with the aid of Sigrid the vampies also joined the expansive legion.[4] Though little is known of how exactly Valder manages his people, they often attack in an uncoordinated fashion without his guidance[1][2], but have been known to be peaceful, while the vampires behave more independently, actively seeking death and destruction.[4] There also exists a race of humans in Felheim, hunters that live quiet lives,[4] but not much is known about them.

Their leader is always chosen by the Fell Gauntlet, a sacred weapon from the Great Dissonance, wieldable only by the living, and capable of raising an endless horde of undead. It is unknown how a new leader is chosen, but the Fell Gauntlet chooses them for itself.[4] With its great power came many ruthless leaders, including their former leader, who in an unprovoked war caused the death of Heavensong's previous Emperor and Empress.[4] Since then, Valder has been establishing a new peace in unstable times, but ever with the intention for furthering the dominion of the undead.

Felheim is a Legion, and represents a war-torn undead race, ruled by an endless number of skeletons. Almost every unit is some variety of undead, from vengeful spirits to a Frankenstein's monster-style zombie. The cold and desolate landscape, combined with their tyrannical history and general lack of identity between its members, make them representative of an exotic, destructive, and militaristic nation, as an 'evil' counterpoint to the usually safe and familiar nation of a protagonist in Role-Playing Games. In this case, they contrast with Cherrystone, where its people are safe, its rulers are peaceful, and the land is warm. This is further emphasised by their opposing colours of red and blue, often seen as traditional opposing colours in teams. However, Felheim is somewhat subversive of this, as their current leader, Valder, has a history of peaceful negotiations, and the undead villagers are very peaceful and quiet, when not engaged in war.[4] Their soldiers are also shown to be somewhat comical, and not always extremely serious in battle.

Many of the unit designs have additional spikes, such as on the Wagons and Ballista, complimenting the scarier appearance of their army, even if functionally not very different.

The Commanders all have European names, from colder climates including Scandanavia and Germany, reflecting the arctic climate of Felheim. The Commanders of Felheim represent a classic 'evil' Role-Playing Game team: a bloodthirsty vampire, a battle-driven zombie, and a darkly foreboding necromancer.

Many of the Felheim army are shown to be both disposable and nonchalant to harm, with many soldiers simply losing parts of their body in the use of weaponry, or even using each other's bodies as a form of weaponry. This both reflects the immeasurable scope of their army's resources as a great horde, and as their morbidly sombre demeanor to their own brand of mortality.

The Commander Grooves are designed with an emphasis on aggression[5]: Valder provides himself many disposable units to force battles, Ragna jumps into armies to take out large swaths of units, and Sigrid eliminates large enemy units for her own survival, each forcing the enemy into unwilling combat, by taking advantage of an iniitiative to deal damage. They can each operate strongly in a variety of scenarios, promoting positional advantage to maximise damage potential, but often at the risk of sustaining defencive counter-attacks.

A small island off the western coast of Felheim, and the home of the Vampires after Sigrid joined the legion.[4]

A sprawling fortress where Valder, master of the Felheim Legion, resides.[4]

A vast stretch of taiga that divides east and west Felheim. It is a graveyard filled with bones of the large creatures that roam Felheim. Felheim's Dreadspears collect and fashion these bones into spears. Much like the Quagmarsh, the many deaths in the Frozen Forest give it a particular potency for Necromancy.[4]

A burial place for the fallen of Felheim, manned by undead ghouls. Felheim's Warlocks are summoned from catacombs deep beneath, drawing from the residual necrotic energy.[4]

A coastal fortress on Felheim's eastern tip. It serves as a retirement home for Felheim's undead veterans, including Dreadbows. During the winter solstice, Felheim's Villagers journey to deliver knitted scarves and jackets to Silentstone.[4]

A mysterious and massive lake to the far west of Felheim, feeding into the River Aldor. It is likely the place where Valder was first bound to the Fell Gauntlet under strange circumstances.[4]