An Ancient Adversary is the 2nd mission in Act 7 of the single player campaign. This is the final mission of the main story, and upon completion the game's credits will roll.

You play as a united force of the Commanders of Aurania, facing off against Requiem's bearer, Princess Elodie

Finishing the mission gives the player access to Elodie in all modes of the game.

Defeat: Any ally Commander is defeated 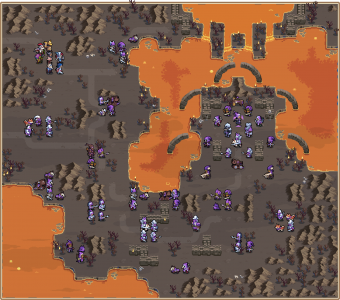 The player begins with 1500 gold. This is used for Nuru's groove.

Every 2 turns, one ally Commander will alert the player they hear music. On Elodie's turn, they will become possessed and convert to Elodie's side. Upon possession, they gain 100% Groove, and will either attack the closest target, or use their groove. For most Commanders they prioritise attacking other Commanders, unless they would deal too little damage, in which case they favour their Groove (In Ragna's case, she will almost always use her Groove instead).

At the end of Elodie's turn, the Commander will be returned to normal, and be left with 0% Groove (regardless of their Groove before possession).

The Commanders are possessed in a fixed rotating sequence. Mercia is the only Commander who will never be possessed. The sequence is listed below:

Upon approaching the final confrontation with Elodie, any possessions will be cancelled, and Elodie will no longer attempt to possess Commanders. At this point, Elodie will begin to advance on the player.

Elodie herself is made extremely powerful. She receives only half damage from all sources, and has 15% health regeneration (as opposed to the standard 5% of Commanders). Though, she will not use her Groove once in battle.

With Sigrid defeated, only Requiem itself remains. What they discover is a woman--a phantom of Princess Elodie of Cacophony, and Requiem the instrument she wields. Unfortunately, they are unable to convince the spirit of Elodie of their intent to destroy Requiem, and she believes they will be drawn by Requiem's call. They decide the only way forward, is to fight. But before they even begin, Elodie entrances them to sleep. Until a waterlogged Ragna suddenly arrives screaming murder against Sigrid for leaving her to walk through the ocean, and awakens the many commanders. Valder explains the situation, and Ragna joins in to crush Elodie--together, they can resist Elodie's power.

With Elodie finally defeated, Requiem lies benign on the ground. The world is rescued, for now. But Mercia has other ideas. She sees the Cherryblade as a sign she was entrusted to take down Requiem, and believes if she can out-will Requiem's influence, she can bring an end to the weapon. But, if she fails, she risks becoming the very calamity they sought to prevent. Refusing to heed their warnings, Mercia grasps Requiem... But what will become of her?

As you don't have any regular units in this mission, you'll have to rely exclusively on your commanders to fight. This is both a blessing and a curse, as the enemy will be easily baited to attack anything they can, but you have to be careful not to let any of your commanders get surrounded. Losing even one will result in instant defeat. You may still obtain units with the use of grooves such as Valder's Rise Dead and Nuru's Teleport Beam.

Until you reach a certain point in the mission, Elodie will also use her powers to take control of one of your commanders during her turn. The commander under Elodie's control will have their groove charged instantly and will be able to attack. The player is given notice in the turn immediately preceeding the takeover. The commander is only controlled for 1 turn, and will lose all their groove upon returning to your side. If you have a groove charging or ready, it's recommended to use it quickly, especially if the commander is about to be mind-controlled. Because of that, it's recommended to play semi-aggressively, advancing as much as possible while keeping yourself healthy with Healing Aura.

In a pinch, you can dive into the enemy lines with the commander that's been mind-controlled, as they will not be attacked by Elodie's troops while under her influence.

The order in which the commanders are mind-controlled is fixed: Koji > Nuru > Ragna > Valder > Caesar > Emeric.

Mercia will never be taken over by Elodie, so you can rely on her Healing Aura to keep the army going. Use her offensively or to finish off low-HP troops as often as you can. Valder's groove charges incredibly fast, and the raised skeleton can be put between a mind-controlled commander and the rest of the party, significantly reducing the impact of Elodie's seleceted minion.

Ragna's Shield Jump, despite it's slow charge, is an amazing tool for opening engagements. Even if you put her right in the thick of it by jumping between a dozen enemy soldiers, your remaining commanders will be able to finish the weakened units quickly. This damage will not decrease even if she's severely imjured.

Cesar's inspire can give you up to 4 turns at the cost of one, and can be used to get someone else's groove to full, and use it within the same turn.

Who dares enter this place?

I am Princess Elodie of Cacophony...

Sacrified by my own hand to this instrument of death.

The weapon I bear is Requiem.

It is a bringer of ruin.

My soul is tethered to it. We are slave to one another.

I will not let you claim it.

Claim it? I don't want Requiem. None of us do!

Perhaps you do not think so, but it is Requiem's nature to twist desire.

To seduce with the promise of power.

Requiem will bend you to its will.

It seeks a wielder. It craves darkness.

And it rejoices at your presence.

No. I gave my life to protect the world from this weapon...

Mercia, you can't reason with her.

She's a wraith - a shadow of someone long gone, resolved to a single purpose.

Your mage is right. Words will not help.

We have but one recourse...

Together we can take her!

I am sorry. I cannot let you leave.

Leaving me to drown!

I'll rip her pointy ears from her pasty head and RAM THEM DOWN HER THROAT!

What the heck is going on?!

And now this phantom is our foe.

I'LL TEAR YOU TO PIECES!

Hey! What the heck just happened?!

Our troops! She's taken them!

You're right, My Queen... This is Requiem's power.

What are we going to do?

Don't worry, Koji. It's going to be okay. We just have to reach Elodie.

Right! Last one there is a rotten snuffish!

If even one of us is defeated, Elodie will finish us all off! Don't forget, we need each other.

Her Majesty is right - we must stand together.

I hope we get out of here alive...

Few who venture into the Dragon's Cradle leaves with their lives.

Ease up, Mr. Sunshine... you're scaring the kid.

Requiem drew you here... And Requiem will be your end.

If only the mortal heart were not so easily corrupted.

You fight for ruin...

But you will not leave this place. The curse of Requiem will remain in Dragon's Cradle.

Listen to us! We don't want Requiem!

You are strong, but I will not be overcome.

Do not speak. Your words are meaningless.

I will defeat you, and Requiem will enter its slumber once more.

This is our chance!

Start of Ally turn when any ally has 100% Groove

We might have lost our troops, but we still have our Grooves.

Let's make the best of them!

Oh no, I can hear the music again!

You hear the music. You know Requiem's will. Do as I command.

Hey, it's alright. We know it wasn't you.

Indeed. It was Requiem. Its magic is strong.

We have to be careful. Talk to each other. If one of us feels weird, we tell the others.

It's happening! There's music playing in my head!

This is going to be fun!

Requiem feels your rage. Use it.

That's a good boy. Do as Requiem commands.

I hear Requiem's song. I feel its insidious magic at work... Distance yourselves.

With Requiem's help, you can earn the respect you deserve. Show them your power.

I am the Lord of Death. All are subject to me.

Keep your distance from me, all of you. I hear Requiem's call.

You have great power, mage. Requiem asks only that you use it.

Let magic's will be done.

What a repulsive power... I am sorry, my friends.

Hey guys, I don't hear the music any more!

HA! That stupid music is GONE!!

Caesar, you seem better! Has the music stopped?

The song is fading... Requiem's magic no longer afflicts me.

Hmm, the music stopped... It seems Elodie has abandoned that particular tactic.

Your lives are forfeit. The time has come for you to die.

Looks like Elodie's joining the fight herself! Careful everyone!

Ragna... This cannot be!

Yes. Even I must admit.

This group is not half as deficient as I had assumed.

Hang ong, hang on, hang on. Did Valder just say something... nice?!

It is not too late for me to rescind my comment...

Haha! You crack me up, skullface!

I can't wait to tell Mom about all this!

You're going to tell your mother that you risked your life fighting an apocalyptic force?

...What a singularly interesting parental methodology.

Dad knew it would come to this...

I think if he'd lived, he would have told me about it all one day.

He gave me the Cherryblade.

He clearly wanted me to look after Requiem's key!

You know what that means, right?

What? What does it mean?

It means Requiem is my responsibility.

Do not touch it, girl!

At best, you can only hope to meet the same fate as Princess Elodie.

We can't risk that happening to you.

We can't risk leaving it here! If we don't destroy Requiem now...

...It will find a way to hurt people again.

Maybe, if I give it my all, I can defeat Requiem.