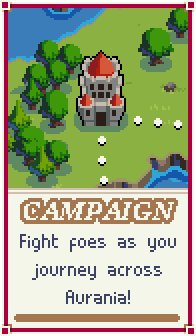 The core Campaign of WarGroove, following the journey of the warrior Mercia and her friends after a war breaks out between nations.

It provides tutorialisation on controls, combat mechanics, and units. It has 21 main missions, and 12 side missions, giving 33 missions in all!

Provided in the Double Trouble DLC, an additional campaign following a family of Outlaws: Wulfar the chieftain, and his young twins, Errol and Orla, as they pull off heists across the continent.

The Co-op Campaign can be played alone, or with a friend, Locally or Online. It is split into 4 routes, and has a total of 10 missions.

Players can create, share, and play their own custom campaigns, following their own stories with new people in new lands!

Custom campaigns can be made in the Campaign Editor. Any you have downloaded through the Custom Content browser or as a mod can be accessed here to be played. 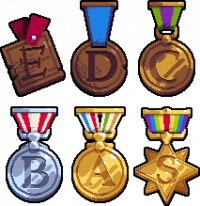 Each of the ranked medals

Upon completing a Campaign mission, the player is awarded a rank. The rank awarded is determined by the turns taken to complete the mission, and the current difficulty setting. Completion of a mission is marked by a flag being raised on the mission icon. The flag will be a golden colour if the mission was completed with an S rank, otherwise it will be red.

An S Rank is only achievable on a minimum of Hard difficulty, and if the player won without loading from any Checkpoints.[1] If either of these conditions is not met, the player will be limited to an A rank. Missions can replayed at any time to earn higher rankings and the full amount of stars.

Campaign difficulty can be adjusted between missions through three setting sliders:

By moving a slider to the left, the game will be made easier, and moving the slider to the right will be more difficult, with 100 as the default value for each setting.

The intended and Default Wargroove experience is Hard difficulty, with all settings unchanged. Additional difficulties provide an easier gameplay experience but restrict the available completion awards.

Custom difficulty that lets the player set the sliders freely. Adjusting the sliders to easier modes reduces the maximum number of stars that can be obtained per mission from three to one, however there are no benefits for setting a custom difficulty above Hard (Default) Mode.