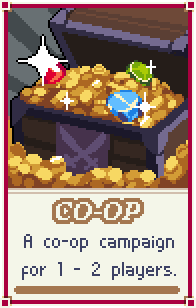 The Co-op Campaign is the campaign included with Wargroove's free DLC, Double Trouble. It follows Wulfar and Errol & Orla in a heist to steal from the four major factions on Aurania.

The campaign has a freeform style, with the path branching after the first mission to each of the four factions' territories. In addition, players will take control of two separate commanders of the Outlaws, and must work together to achieve victory.

The campaign can be played on local and online multiplayer.

During play, each controller can individually take control of Wulfar or Errol & Orla's turn by holding down any key for 1 second.

The Campaign can be run as an online campaign session. By going to Multiplayer, and selecting Online, you will be shown your lobbies. Open a "New Match" and on the map selections the final tab will allow you to select a Campaign (where the official Double Trouble campaign is available by default). After you open the lobby, you can invite players to join using the room code. The game has full crossplay, so players can partipate from any platform.

Note that through online play, you cannot change your commanders in the middle of the campaign, and will stay as Wulfar or Errol & Orla for the duration of the campaign.

If you wish to pause your campaign at any time, you can select from the menu "Mission" then "Suspend". This will take you back to your multiplayer lobby, and your Campaign will be listed as an active session.

Please note that selecting to "Leave Match" from the lobby menu, or "Abandon" from within the game, will automatically leave the campaign. You will be unable to rejoin, and any new campaigns will need to start from the first mission.

Players who share the game using Steam's Family Sharing will be unable to participate in the Double Trouble campaign, as shared accounts will not have access to DLC.

Upon completion of the Introduction, four seperate routes going to each faction unlocks. The Final Missions can only be played once all four routes are complete.