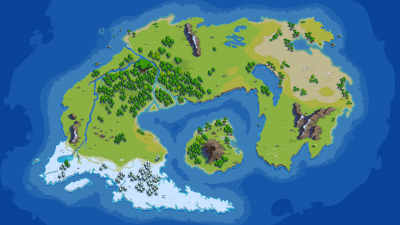 Aurania is a continent that serves as the main setting of the Campaign of Wargroove. Thousands of years ago, the continent was split between two rival kingdoms: Cacophony in the west, and Silmor in the east. After a long and bloody war called the Great Dissonance, Cacophony finally triumphed over Silmor in a battle in what is now known as the Quagmarsh, but ruined itself in the process. Since then, four nations have risen on Aurania: the Cherrystone Kingdom, the Felheim Legion, the Floran Tribes, and the Heavensong Empire.

The fertile green plains of western Aurania, once the heartland of Cacophony, are ruled by the Cherrystone Kingdom. Cherrystone is peaceful and prosperous, but often has to fend off raids and invasions from Felheim to the south. The kingdom has a wary yet cordial relationship with the Floran to the north, and are on friendly terms with Heavensong to the east.

The icy wastes of Felheim cover the southwestern edge of Aurania, and are home to a handful of humans and the undead of the Felheim Legion. Only those few who have successfully wielded the Fell Gauntlet have been able to pull Felheim out of anarchy, but their reigns have often been bloody and short; Valder is the latest Lord of Felheim. For thousands of years, western Felheim has also been the domain of two High Vampires, the High Vampire of the West Sigrid and her former Master.

A murky forest known as The Gloomwoods lies between Cherrystone to the south and The Lost Leagues to the east. About 900 years ago, the first Florans appeared on the coast north of The Gloomwoods following the fall of a comet, and the region is now the territory of the Floran Tribes.

Eastern Aurania is the homeland of the powerful Heavensong Empire. It is a mostly hot and dry place, but the people of Heavensong have persevered despite the harsh climate and produce the most advanced technology in Aurania. Heavensong's unsurpassed naval might has allowed it to found multiple colonies in other lands across the Great Ocean.

Also known as Cradle Isle, it is an ominous volcanic isle surrounded by the Circle Sea and mainland Aurania. The volcano is said to be the resting place of an ancient and powerful secret.

The body of water that surrounds Cradle Island and separates it from mainland Aurania. It is home to the sea-dwelling Merfolk and Deepfolk, who have a history of conflict. The Merfolk inhabit the northern portion of the Circle Sea, and have been allied with the Cherrystone Kingdom ever since King Mercival II brokered a peace between the Merfolk and Deepfolk. The Deepfolk inhabit the southern portion of the Circle Sea, and recently aligned with Felheim in exchange for a steady supply of Bone Turtles produced by Valder.

A stretch of unclaimed wilderness between The Gloomwoods and Heavensong. In ancient times, it was the westernmost territory of Silmor and a major battlefield in the Great Dissonance.