Life in 19x19 (19x19 for short) is the longest-running competitive map in Wargroove history. Originally made in 2019 by Fadedsun for use in Groove of War 3, 19x19 has been used in a number of competitive events. The name is a reference to the size of a board in the game GO. The map was included by Chucklefish in the game's "Double Trouble" update in 2020 under the name "Haggered Hollow". The latest version of the map "Theft in 19x19" has been updated to include hideouts and thieves. 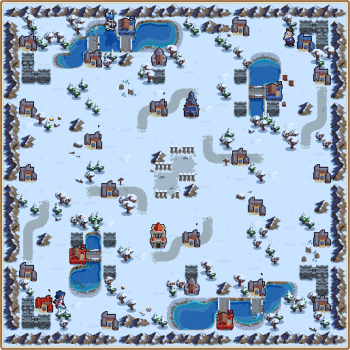 A modern version of the map, featuring reworked layouts to encourage attacks across the mountainous edges, and the inclusion of the new Thieves from Hideouts, introduced in Version 2.0.

The original version of 19x19 created in 2019. Unlike other versions, this one does not ban any units, instead 'soft banning' wheeled units from the western Barracks and providing an extended deployment route on the eastern Barracks.

Version 1.5 was first used competitively in Groove of War 3, making it one of the first maps to reach long-term success as a competitive map.

When the original Life in 19x19 was added to Wargroove's default map list in Version 2.0, it was renamed to Haggered Hollow and given the Ice biome. It is functionally identical, but is now accessible as a default map.

This was later used in the Groove of Nations 2020 map pool, alongside other minor events. It has become one of the most common maps for introduction to PvP due to its accessibility and versatility as a map.