From Wargroove Wiki
(Redirected from Overview)
Jump to: navigation, search

Wargroove is a strategy game where players hire an army to overcome their opponents army. In most battles conquering buildings for gold and investing into units which counter your opponents is the key to victory.

The game has options for many types of play, both for single player and multiplayer. It also has tools for creating custom content, which are available immediately.

When first starting a single player game, only Campaign mode is available. This takes the player through the game's story through a series of increasingly difficult maps, with an unfolding story and cutscenes interwoven.

The first few maps train the player in the basics of how Wargroove's rules and mechanics work.

The movement grid, showing where the character can move to

After selecting a unit, a series of squares will become highlighted around it. The light shaded squares are eligible tiles which the unit can move to. When those are highlighted an arrow showing the units path will appear over the grid. Tiles which the unit can move to are shaded, and empty tiles on the outside of the shaded range are tiles within attack range but not movement range.

Tiles which are shaded red are tiles which can be attacked, and are in range to be attacked. After selecting them will move the unit beside that tile and attack.

When a tile is selected an action menu will appear with orders like "Attack", "Wait", or "Cancel". Selecting Attack will attack the unit beside that square, this option only appears if there is a unit eligible to be attacked within range of the tile. Wait will move the unit there and take no further action. Cancel will close the order menu, and return to tile selection. 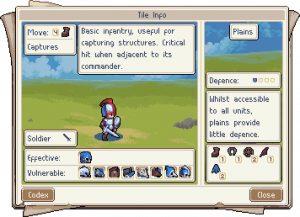 If a unit is right clicked, an expanded information window will display both the tile's terrain information beside the selected unit's info. unit info displays the movement type and number of tiles that unit can move, if it's able to capture buildings, a description, unit type name and icon, and a grid of 'effective' and 'vulnerable' units in combat.

The very bottom of the Unit Info window has a button to open the game Codex, an in-game encyclopedia outlining the game's units, terrain, commanders, lore, and rules. It's an invaluable resource for quick referencing unit info, movement, and damage info and provides background and story behind the game's characters and the world. As the game advances more codex entries will be unlocked.

At its core Wargroove is an army building game. A large part of match strategy centers around purchasing units which will counter your opponents army and fortifications.

Before units can be recruited to build your army you'll need income. Each building owned by a faction will earn that player

Buildings act like immobile units - they have hitpoints, and can counter attack. When they're attacked and run out of HP they'll become neutral, and unowned. A number of units have the ability to 'capture' buildings (displayed in the Unit Information window) - these units can take control of a neutral building and place it under ownership of their faction - earning income starting the next turn.

Current funds are displayed at the top of the game window, next to the commander icon.

Special building types allow the player to recruit new units using gold. Each unit building can only recruit their designated type (Land, Air, or Naval) once per turn. Recruited units spawn in one of the four tiles directly adjacent to the building, provided the selected tile is unoccupied.

Cherrystone Commander Mercia
Commanders are a special unit type which are unique to each faction. They are the most powerful unit type, and cannot be recruited using buildings - in most matches there is one commander per player and if they are defeated that player is eliminated from the game.

A commander can only use his or her groove when their groove meter is filled to 100%, and using it depletes the meter to 0%. The meter fills under varying different conditions, including dealing and taking damage, and at different rates for each commander.

Most matches can be won by either defeating the enemy commander, or capturing the opponent's stronghold. Players will use the units available to them, and recruit new units, to capture buildings for income, then use generated gold to purchase units.

Units can move across the game board to attack other units and structures. Unit's attack power scales based on their health, so a unit a full health can deal much more damage then the same unit would weakened. Because of this, attacking first is advantageous, as the opponents counter attack will be weaker after they've taken damage. 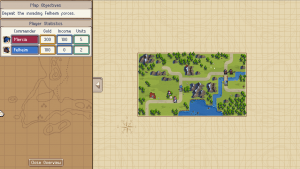 The Overview window, showing the entire map, player statistics, and objectives
Selecting any empty tile and selecing 'Overview' from the action menu. This opens the overview for the match.

The overview window shows the entire game map zoomed out, displays the win objective(s) for the map, and lists player statistics like their current gold, current income, and the number of units they control on the map.

Injured units will display their hit points over their map image. Units can be healed by moving adjacent to a friendly building and choosing "Reinforce". This will drain health from the structure to heal the unit, and it will also cost the unit a proportional fraction of the gold cost of the unit. For example, healing a unit with half health will cost half that unit's total cost.

Reinforcing is a strategic decision -- it heals a unit, but makes the building temporarily weaker, and more vulnerable to capture. Unlike units, buildings will regenerate health each turn, eventually restoring themselves to full health.

A damage preview indicating an attack will deal about 54 HP of damage, and be counter attacked about 19HP
When selecting to attack a unit a preview will display the effectiveness of the attack. This is based on unit effectiveness toward that unit, the attackers HP, and the defense provided by the defending unit's terrain.

The damage displayed shows as a % of the unit's maximum health. So dealing 60% damage to a unit at full health will reduce their HP from 100HP to 40HP, and if the defender had 70HP it would reduce them to 10HP. If the damage preview shows over 100% then the attack will most likely kill the defending unit in a single attack - even if they are at full health.

A damage preview showing the range of possible attack damage

Previewing which attacks will be most effective, and planning to critical strike are important elements in maximizing unit's attacks.

Note that there may be a random 5% difference in the actual damage dealt. Checking the "Show Damage Range" checkbox on the "Advanced" tab of the "Options" menu will cause damage previews to display maximum and minimum values instead of the expected/average values that may not be accurate. 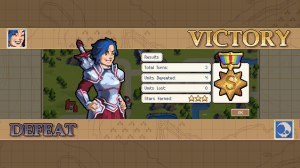 If the match is won, the results screen will display both stars. used to unlock new content in the game, and a rank metal based on the number of turns the match took. Earning an S-Rank (the highest) requires winning the match in as few turns as possible.

After defeating a map on the campaign world map a flag will raise next to the map icon. If the player earns an S-Rank, the campaign map will display a gold flag and a metal beside the maps name. The number of stars earned will fill in at the top of the world map.

Maps can be replayed to earn a higher rank and collect more stars.